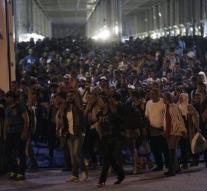 athens - Greece on Monday ten Syrians sent back to Turkey in the framework of an agreement on refugees between Turkey and the EU. The ten, seven men, two children and a woman, have withdrawn their request for asylum and voluntarily returned to Turkey. They are flown from the island of Lesbos in the Turkish city of Adana.

European-Turkish agreement in March came about in an attempt flow of refugees from the Middle East who went through Turkey to Greece, to halt. Greek islands were flooded by refugees. Turkey promised to catch them and Europe promised to take some of them in a well organized manner. So far, only about 730 refugees transferred under the agreement of Greece to Turkey.

Turkey meanwhile threatened to terminate the agreement if the EU comes back on the commitment to quickly Turks do not require visas more for their travel to the EU.