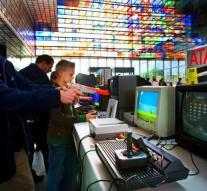 san francisco - Nestlé got it with Atari because of a kit cat advertisement in which gamers play a computer game that resembles Atari's Breakout very much. According to Atari, Nestlé is abusing the nostalgic image that hangs around Atari, reports the BBC.

That Atari's Breakout is meant in the kit cat advertising is bright. The game played in the commercial is identical to Breakout with the only difference the addition of Kit Kat strips as pebbles. Breakout was a full hit for Atari in the 1970s. It was the highlight of the company and with Breakout it was the successor to Pong. Breakout has been developed by, among others, Apple's, Steve Jobs and Steve Wozniak's founders.

Nestlé argues, among other things, that it was an innocent wink for retrogamers. Furthermore, the Swiss chocolate maker places questions on the timing of the lawsuit. The alleged advertising was broadcast in the UK in 2006 and Nestlé has no plans to resend the video. Perhaps the comeback of Atari has something to do with it. The company is launching a new game machine for the first time in years.