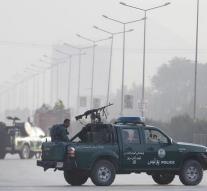 kabul - In a bomb attack in the northern province of Balkh at least four people slain and six people injured. That said a police spokesman Thursday.

The explosion took place in the district Khulm. The explosives would have been in a bag. Regional director, Mohammed Afsal Hadid speaks five dead and fifteen wounded. According to him, the attack targeting the lawmaker Assadullah Scharifi, but goes well with him.