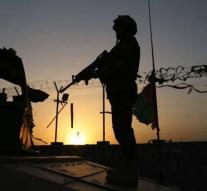 cabul - At least 58 people, including fifty citizens, were shot dead in northern Afghanistan by militants of the Taliban and Islamic state. Among the dead are seven police officers and an Afghan soldier.

The group of militants stormed the village of Mirza Olang on Thursday night and then became involved in a violent firefight with agents and other insurgents. After 48 hours, the fighters of the terrorist organizations had conquered the village. Then they gathered the inhabitants and shot them dead.

About 25 villagers are missing. Presumably, they were abducted by IS followers.