Home / World / At least 200 wounded by earthquake in western Iran 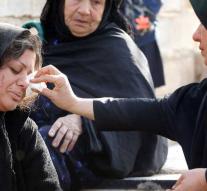 teheran - The west of Iran was startled on Sunday evening by an earthquake with a magnitude of 6.3 on the Richter scale. According to the local authorities, there have been no deaths for the time being and the quake did not cause any major damage. At least 200 people were injured, but only a dozen of them had to be treated medically. The shock was also felt in the neighboring provinces and in Iraq and Kuwait.

According to the American geological service USGS, the quake occurred at a depth of 65 kilometers in the province of Kermanshah. The epicenter was located near the town of Sarpol-e Zahab on the border with Iraq. Four aftershocks followed in that region. The residents left their homes in panic and fled the streets, according to state television.