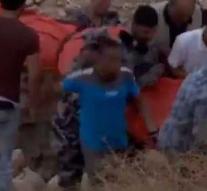 amman - At least eighteen pupils and teachers died on the Jordanian side of the Dead Sea on Thursday due to a sudden flooding as a result of severe storms. The bus they were in was flushing off the road. According to local authorities, at least 22 others were injured. A state of emergency has been declared in the affected area.

The victims were surprised by the swirling water during a school trip. They were part of a group of 44 on their way to a hot spring in the popular Zara Maeen region.