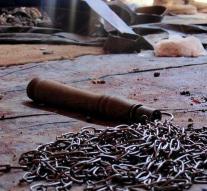 baghdad - A suicide attack on Monday at least ten people were killed at a checkpoint of the Iraqi security forces south of Baghdad. Another 25 others were injured, said sources in the police and the emergency services.

The perpetrator drove with explosives laden car into the station in Yusufiya, fifteen kilometers from the Iraqi capital. Among the dead are both officers, soldiers and civilians.

Responsibility for the attack has not yet been claimed, but the suspicion is that terrorist organization Islamic State is behind it. The group performs frequent attacks on Iraqi security forces. In addition, the Iraqi military Monday began an offensive to retake Mosul, the second largest city of the country, on IS.