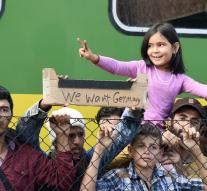 - The asylum status of refugees in Syria will not be changed to stay in Germany. That the German Interior Ministry announced, reported the newspaper Frankfurter Allgemeine. Earlier, Thomas de Maiziere said Minister of the Interior still that the shelter is limited in time and without family reunification.

The deterioration of the status of asylum for Syrians would take effect immediately, but that goes against the ministry. " The policy remains the same. All changes in the coalition discussed ", said in a statement. The government parties CDU / CSU and SPD have evidently not yet spoken.

Ralf Stegner of the socialist SPD criticized De Maizière for his statement. " The idea of ​​sharpening, to the detriment of the Syrian refugee families, as can meet up with the SPD is adventurous. This chaos, whether it is caused by the CSU today or yesterday by the CDU, is only beneficial to the right parties. "