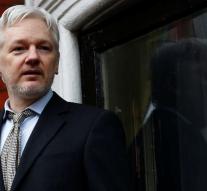 london - The Swedish prosecutor has Ecuador received permission to interrogate WikiLeaks founder Julian Assange at its embassy in London. According to the Swedish Prosecution, there are still strong indications that Assange raped a Swedish woman in 2010.

Assange has been living for four years in the Embassy of Ecuador in London. Authorities in Ecuador, which has been given Assange political asylum, adopted the interrogation. It is not clear why Ecuador agrees after four years. Also there is no date known.