Home / World / Assad's wife 'got a chance to exile' 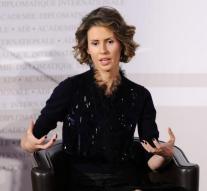 moscow - The Syrian President Assad's wife says she was given the opportunity to go into voluntary exile. The enemies of her husband would have made her the offer to flee the country. Asma Assad said in an interview with Russian channel Rossiya 24.

The offer of voluntary exile would be intended to undermine the confidence of the population in Bashar al-Assad. It was not clear from the corner came the offer.

'I've been here from the beginning (of the war) and I have never thought to be somewhere else,' said the first lady, who offer as 'stupid' dubbed.