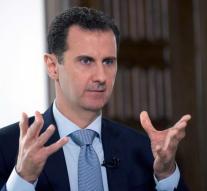 - "A few hours before the start of an agreed ceasefire in Syria, President Bashar al-Assad Monday confirmed his claims to supremacy in the country."

"\"The armed forces will unhesitatingly and independent of all domestic and foreign circumstances continue to restore security in all parts of Syria '', so let Assad know according to the Syrian state news agency."