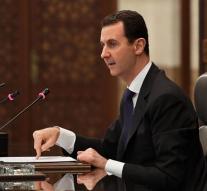 hama - Syrian President Bashar al-Assad has prayed in a mosque in the city of Hama on Sunday, on behalf of Eid al-Fitr, the end of the fasting month, far from the capital. Syrian state media showed the president with clergy, parliamentarians and civilians in the al-Nouri Mosque in Hama, more than 180 kilometers north of Damascus.

According to observers, Assad was in no years as far from Damascus. It could be a sign that he has more confidence as a winner of the civil war. According to the predecessor in service, Sheikh Nahjem Eddin Al-Ali, does not take long. 'The Syrians are a few steps away from the victory and return of security and peace in the country,' said Sjeik al-Ali.