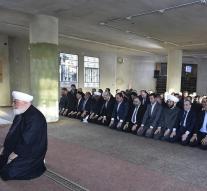 - "Syrian President Bashar al-Assad on Monday appeared in public on the occasion of the Islamic Feast of Sacrifice, Eid al-Adha. Assad took part in a prayer service at a mosque in battered daraya, a southwestern suburb of Damascus."

"The state news agency SANA spread photos of the department to which Assad in a gray suit kneeling and a leading cleric for going into a mosque apparently damaged by the war."

"The sacrifice takes place at the end of the annual pilgrimage to Mecca. Eid al-Adha is celebrated this year on 12th and September 13th. The new cease-fire in Syria would be in the context of this Muslim festival Monday should go at sunset."