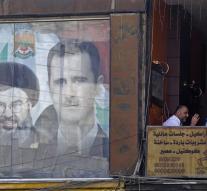 moscow - The Syrian troops have released 85 percent of the country from terrorists or rebels. This said a Russian commander involved in the struggle in Syria, Aleksander Lapin, on Tuesday against Russian media. According to Lapin, the extremists of Islamic state still dominate about 27,000 square kilometers in Syria, a land with an area of ​​over 185,000 square kilometers.

The Syrian civil war broke out in 2011 during protests against the dictatorship of the President of Bashar al-Assad's clan who has been in control of the country since 1970. The Kremlin has always supported Assad's rule. In September 2015, Russia seized military force to prevent the destruction of the exhausted regime of Bashar al-Assad. Then Assad ruled only about 20 percent of the country. The rest was mainly in the hands of Sunni extremists who formed the strongest rebel groups.

In his calculations, the Russian officer does not seem to take into account the autonomous Kurdish north of the country where Assad has nothing to say. The Kurds are allies in the battle against Sunni extremists.