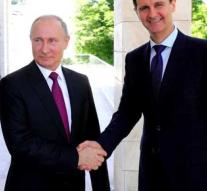 damascus - Syrian President Bashar al-Assad has his Russian colleague Vladimir Putin's 'deep participation'. stated after shooting a Russian military aircraft off the Syrian coast. According to him, the incident is the result of the 'usual arrogance of Israel \u0026 quot; always the 'dirtiest means'; used for his ' low goals \u0026 quot ;, can be read in a condolence letter. The Syrian state news agency SANA reports this on Wednesday.

Assad expressed his confidence that the incident will not affect the fight against terrorism in Syria.

The Syrian air defense accidentally shot down a Russian reconnaissance plane on Tuesday, killing fifteen Russian military personnel. Actually, the Syrians wanted to attack Israeli fighter planes over the coastal town of Latakia. Moscow accuses Israel of putting the Russian aircraft in danger with the aircraft. Israel, on the other hand, places all responsibility for the incident to the regime of Syrian President Bashar al-Assad.