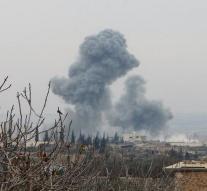 beirut - The army of Syrian President Bashar al-Assad, the entire city of Aleppo controlled with the help of its allies. According to the Syrian Observatory for Human Rights are also the last Wednesday rebels who long persisted in the eastern districts, evacuated.

The war London-based monitor said only a small area in a western suburb is still in the hands of the insurgents. The fierce battle and the continued bombing in Aleppo killed at 21. 500 civilian lives.

A UN envoy could not confirm yet that anyone who wanted to leave also has been away from Aleppo. The evacuation is going according to him. According to another rescuer is the completion of the exodus at hand.

A spokeswoman for the Red Cross said that a total of 30 000 people, including all the sick and wounded and children are brought to safety.