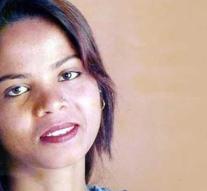 islamabad - The Christian Pakistani woman Asia Bibi, who was on death row for years on suspicion of blasphemy, is still in Pakistan. This is what a spokesperson for the Pakistani Foreign Ministry told Reuters news agency.

Bibi was released Wednesday from the prison in the city of Multan, in the south of the Punjab province. From there she flew to the capital Islamabad, where, according to Reuters sources, she is held for her own safety.