Home / World / As fourth attack in Istanbul this year 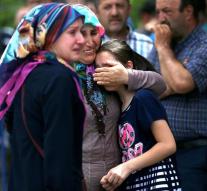 - The bloody attack on the Ataturk Airport is the fourth this year in Istanbul. Total lost in the metropolis on the Bosporus certainly 68 people killed by terrorist violence. Elsewhere in Turkey were many casualties, presumably by Kurdish extremists or members of Islamic State.

Most deaths occurred last October in Ankara: 103. This year the capital was so far rocked twice by bomb attacks. The last twelve months also Suruç, Çinar, Diyarbakir and Midyat were affected by terrorist violence.

January 12: On a stop in the historical center losing twelve German tourists life. A suicide bomber blows himself up in a tour group near the Hagia Sofia and the Blue Mosque. The culprit is an extremist of IS according to the Turkish government.


March 19: In the central Istiklal someone brings a bomb belt detonated. The perpetrator take four foreign passers into death, three Israelis and an Iranian. 39 people injured. Also this abutment is attributed to IS.

June 17: The explosion of a remote-controlled car bomb in the center of town takes six policemen and five bystanders life, even there are 36 wounded. Responsibility is claimed by TAK, a militant splinter group of the banned Kurdish Workers' Party PKK.

June 28: Three suicide bombers targeting the busy Ataturk airport to a bloodbath. Certainly 41 people lost their lives, including thirteen foreigners. The number of injured rises to 240. The nationality and background of the perpetrators is not known yet. The government suspects IS.