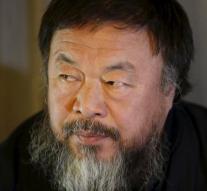 - "Chinese artist and activist Ai Weiwei is next week in the Netherlands. The dissident artist, known for his critical approach to the Chinese government, will come to our country for the opening of an exhibition at Foam photography museum in Amsterdam. He is a guest in the interview College Tour program, which is broadcast on 23 September."

"Ai Weiwei lives and works in Berlin, after having not allowed to leave China for years. Formally, it was because his company would have a tax arrears of millions, but according to activists had to do with his critical comments on his blog and on the Chinese version of Twitter, Weibo."

"Ai Weiwei had more to do with foam. The museum posted last year a car with a sunroof to ask the public Lego blocks to collect the artist. He needed for an installation in Australia, but declined to LEGO blocks because it was a politically charged art. Then he was offered the building blocks from all over the world."