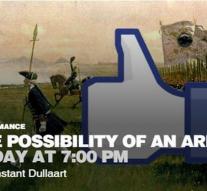 - The Dutch artist Constant Dullaart thousands fictitious Facebook profiles created to protest against the Like button as the foundation for the new economy.

The fake profiles only bear the names of soldiers who fought during the American Revolution in the 18th century. With this army Dullaart declares war on the idea that a large amount of likes equals quality.

Dullaart looks with a critical eye to technological developments and the impact they have on the community and the individual. With his latest project " The Possibility of an Army ', the artist explores the concept of identity, that through the everyday use of social media networks is more relevant than ever. Digital identities are under Dullaart the currency of multinationals.

The artist decides not own what are fake army on Facebook will do, but want to set up a committee consisting of artists, philosophers and critics, who decides who needs extra social attention.

Creating fake profiles on Facebook is prohibited. The social network is trying to counteract this with various techniques, including pattern recognition. Dullaart therefore does not release names of 'his' soldiers. At present, according to the artist about a thousand active but it can rise up to twenty thousand, according to him.

He expects his project certainly remain in position two months, Facebook was not previously thrown a spanner in the works. "It is not my intention to make a business of it, but creating fake profiles is a huge industry that deserves attention," Dullaart as informs BBC Online.

Facebook has not yet responded to the art project.