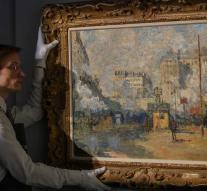 - The first auction day of the legacy of David and Peggy Rockefeller immediately produced a record. With an amount of 646 million dollars, converted by 544 million euros, a lot more money was deposited than for the art collection of couturier Yves Saint Laurent. That yielded some € 200 million on day one.

Among the hammer was Fillette à la corbeille fleurie (Girl with a basket of flowers) by Pablo Picasso. The value was estimated in advance at around 70 million euros, the most valuable piece in the collection. The painting was sold for nearly 100 million.

From Claude Monet Nymphéas and fleur (Water Lilies in bloom) went under the hammer and Henri Matisse Odalisque couchée aux magnolias (Odalisk or woman lying between magnolias). They each generated around 70 million euros. The auction will last until Friday. The proceeds are for ten good causes.