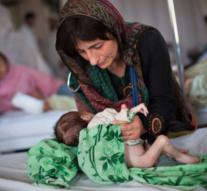 peshawar - Police in Pakistan have arrested several hospital employees newborn babies would have sold. The gang members kidnapped and sold a total of nine children before they ran into trouble, the BBC reported Friday.

The suspects exchanged newborn babies with the bodies of dead babies and told the parents that their child was deceased. The babies were then sold to childless couples, for converted 600 to 2500 euros.

Among the suspects include a nurse, two other employees from the health care and someone who acted as mediator between the gang and the childless couples.