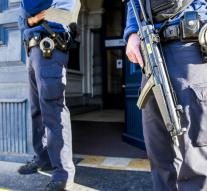 brussels - In Belgian Limburg, the police Thursday morning eleven houses ransacked in a terrorism investigation. In addition, ten people have been arrested. No weapons or explosives were found. This was reported by the federal prosecutor.

The case is completely separate from the attacks in Paris, said the prosecutor. The searches took place at addresses in under Maasmechelen, Houhalen-Helchteren and Maaseik, As and Dilsem-Stokkem.

On further results of the searches and the identity of those arrested is still not disclosed.