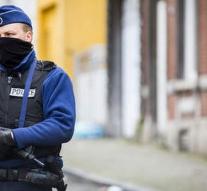 brussels - The Belgian police on Wednesday six people arrested in the investigation into the machete attack that in August Charleroi two policewomen were seriously injured. A total of eight searches were conducted in the Charleroi region. While knives were confiscated, some of which resembled the cleaver used.

The perpetrator, a 33-year-old Algerian who in stalking 'Allahu Akbar' called, was shot in front of the police station where he endangered the policewomen and injured in their face. He died later in a hospital. The man was known to the police, but not because of terrorism.

The Belgian prosecutor handling the case as a terrorist assassination attempt. The six detainees were taken for a 'thorough examination', the federal prosecutor told. Shortly after the attack on August 6 were already searched homes.