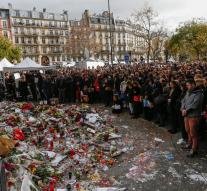 aachen - At the German city of Aachen three persons were arrested in connection with the attacks in Paris. This made the police announced. According to local media, the two women and a man around 09:30 were caught by a special unit of the police.

The three came from an agency in the village Alsdorf when they were caught. The police are with many people on the spot, according to the Aachener Zeitung. Further details are still missing.