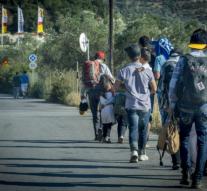 - "After a major fire Monday night in a packed refugee center on the Greek island of Lesbos on Tuesday arrested eighteen migrants. They are suspected of being responsible for the fire, which at least 60 percent of the center to ashes."

"The 3,000 migrants and asylum seekers in central fled the flames out and scattered across the island that lies close to the Turkish coast."