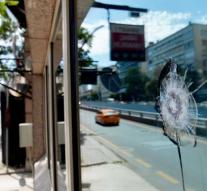 ankara - The Turkish authorities have arrested two men because of the bombardment of the American embassy in Ankara. A vehicle and a firearm were also seized. The arrested people in their thirties have a criminal record and made a confession after their arrest, the authorities in the Turkish capital report.

From a moving vehicle six bullets were fired at the security post at the entrance to the diplomatic post. Nobody was injured. The embassy is closed this week in connection with the Festival of Sacrifice. The building, as well as the consulate in Istanbul, was more often the target of militants.

The Turkish Ministry of Foreign Affairs said that extra security measures have now been taken around the embassy and other US posts. A spokesperson for Turkish president Recep Tayyip Erdogan said on Twitter that it was clearly an attempt to create 'chaos. '

Relations between the US and Turkey are currently very tense. The governments of both countries have a conflict about the American reverend Andrew Brunson, who is being held in Turkey on charges of terrorism.

The US recently imposed sanctions and penalties on Turkey as a means of pressure to free Brunson. As a result, the national currency, the lira, has fallen sharply in recent times. President Erdogan speaks of an 'economic war. '