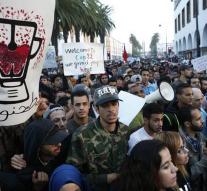 rabat - Police in Morocco have arrested eleven people in connection with the death of a fishmonger last week. The issue has led to fierce protests in recent days, in which thousands of people participated.

Runners in the northern city of Al-Hoceima Friday took a lot of swordfish Mouhcine Fikri up, because that would be caught off-season. The fish was thrown into a garbage truck, but Fikri ducked behind his merchandise to save them. He came when the crusher was turned into the garbage truck.

The people who are now arrested suspected of manslaughter. The authorities probably felt called to do something to defuse popular anger. King Mohamed, who is touring through Africa, sent his interior minister to the survivors to convey royal condolences.