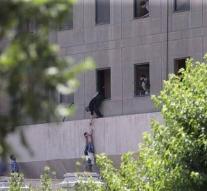 teheran - Iranian authorities have made two arrests after the terrorist attacks this week in Tehran. 'The suspects are emphatically linked to terrorism,' said the Iranian Ministry of Justice. The suspects were arrested in Kermanshah, a city in western Iran.

According to the ministry, some terrorist cells were also dismantled.

At the two attacks Wednesday on the Iranian Parliament building and the mausoleum of Ayatollah Khomeini, seventeen people came alive.

Of the eight attackers who stormed the two, there were five from Iran. They fought before the terrorist organization of Islamic State in Syria and Iraq. IS claimed responsibility for the attacks.