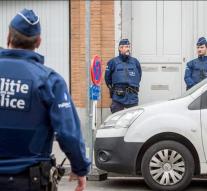 brussels - Three persons were detained for questioning after overnight raids in Brussels were released Friday. That said a spokesman for the federal prosecutor.

In the night from Thursday to Friday, the police conducted as part of a terrorism investigation six search warrants in Laeken, Anderlecht and in Evere. Wassime A., A. Asma and Malika B. were taken for questioning. The investigating judge has now decided to hold them any longer.

When searches did not find any explosives or weapons. There were no immediate plans for an attack, the spokesman stated.