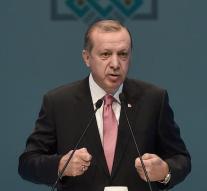 istanbul - Turkish President Erdogan in Turkey arrested journalist Deniz Yücel called a 'German agent'. The German-Turkish correspondent of Die Welt is held to the dismay of Berlin in Turkey.

'As a representative of the PKK as a German agent, this person has been hiding for a month in the German consulate,' Erdogan said Friday in front of the state news agency Anadolu.

German Justice Minister Heiko Maas wanted to talk Thursday about the arrest with his Turkish colleague. Bekir Bozdag, however, said that meeting in Karlsruhe off because he was evil was allowed a meeting with him as a speaker in Gaggenau by the German church.