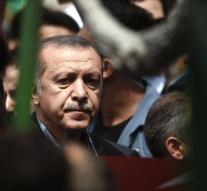 - The Turkish authorities announced Sunday that General Bekir Ercan Van was arrested for involvement in the coup. He is the commander of the air base Incirlik near Adana.

That military airport, where American aircraft and those of allies are stationed in the fight against IS, has been provisionally closed, as well as the airspace. The electricity is out. The foreign troops are stationed make do with emergency generators.

German Defense Minister Ursula von der Leyen, which has 240 soldiers in Incirlik, Turkey has called an important NATO partner,, needed fully democratically controlled armed forces. '' The country faces enormous challenges such,, the brutal terrorism, the war on the southern border and the millions of refugees. '