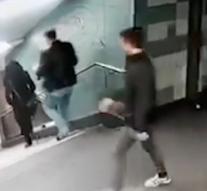 - Four days after a gruesome assault in the Berlin subway German police have arrested a suspect. Surveillance video that shows how a young woman kicked off a hard kick, attracted worldwide shocked reactions.

The perpetrator was part of a group of four men. After the attack the four runs off slowly and let the woman to her fate. The one who kicked the woman, not looking up or around. However, he takes on his Enjoyed a lifting of his cigarette. Meanwhile, several witnesses come to the aid of the woman.

Martin Steltner, spokesman for the Berlin public prosecutor, confirmed to the German newspaper Bild that a person is questioned from the group. Whether it is the perpetrator, is unclear.