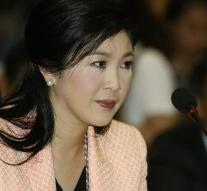 bangkok - Thailand has filed an international arrest warrant with Interpol for former Prime Minister Yingluck Shinawatra. This was condemned by the Thai Supreme Court last week to five years in prison.

She was found guilty of delinquency, in connection with a controversial subsidy program for rice farmers that cost the Thai treasury billions. The 50-year-old ex-prime minister left for the verdict from her country.

According to the Thai authorities, she had fled to Dubai, but that showed that she had traveled to Great Britain. The US CNN reported last week that Yingluck in London had applied for political asylum.

All countries are now called upon to arrest Yingluck if it is found.