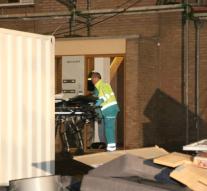 rotterdam - The Surinam police arrested a 26-year-old Rotterdammer on Thursday for involvement in a fatal shooting in 2015 in Rotterdam. It is the fourth suspect arrested in the murder case.

The incident cost 54-year-old Zoran Medak's life. He was shot in the stairwell of his sister's porch residence at the Zevenkampse Ring. The shooting had to do with a drug jam, where Medak, according to the police, had nothing to do with it. The victim came to a cry for help and when he ran the staircase he shot down. Medak died on the spot.

Three suspects were arrested last year and the year before. Two of them were sentenced by a court in Rotterdam in March to a sentence of eight years. A third suspect was given a month's cell for possession of ammunition and xtc pills.

The suspect, arrested Thursday, fled to Suriname shortly after the shooting and stayed there since. The Rotterdammer is now stuck in Suriname. The Dutch authorities have asked for extradition.