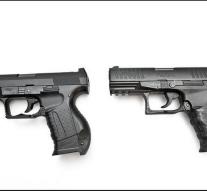 - Three men from Vlaardingen on Tuesday arrested in The Hague because they have shot with pellet guns at people. Police received a report around 23:30 the bombardment and was then on watch cameras live on public roads.

was on the camera images to see it three in a passing car fired, and several police vehicles were sent to the Beach Road. The three suspects were arrested. They had four pellet guns and associated ammunition with him.