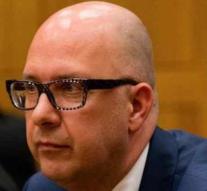 the bosch - The police arrested a member of the trust committee of the city council of Den Bosch on Tuesday. The 55-year-old man is suspected of involvement in leaking confidential information around the nomination of a new mayor in the Brabant capital. The man was lifted from his bed on Tuesday morning, reports the Public Prosecutor.

About the appointment of the new mayor Jack Mikkers, who was recently appointed as successor to Ton Rombouts, revealed great fuss after the Brabants Daily newspaper had published many details and, among other things, the names of applicants.

In the middle of July, an investigation was launched to the man after the Commissioner of the King reported a possible leak from the trust committee. The occasion was an article on July 12 in Brabants Dagblad, which provided information on the candidates and the procedure regarding the appointment to a detailed level.