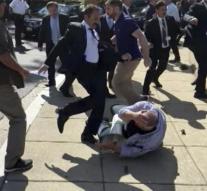 washington - The US police arrested two people for the fighting outside the residence of the Turkish ambassador in Washington. That reported the police Wednesday. According to the New York Times, 12 prosecutors are charged with charges.

The fighting took place during a visit by Turkish President Recep Tayyip Erdogan to the US. Protector of the president was in fog with protesters against the Turkish government in May. Eleven people were injured, including an agent.

The allegations against the twelve of the security team officially announce the police on Thursday. The chance is that they will actually appear before the court. A few hours after the incident, she left Erdogan from the US.

The two arrested have Turkish nationality and live in the US. Earlier, the police arrested two other people, including at least one protector.