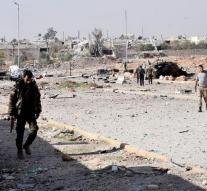 - The Syrian army has conquered a part of an area controlled by rebels in Aleppo. Government forces now have a third of the district Masakin Hanano owned, reported the Syrian Observatory for Human Rights Tuesday.

According to the observatory since Monday over twenty civilians died in the fighting. In the rebel area would still live 250 000 to 300 000 people in the east of Aleppo. The lack of food, water and medical assistance has resulted in these districts into a humanitarian crisis.

The army of Bashar al-Assad carries last week again air strikes on eastern Aleppo, after expiry of the declared truce in October. Prior to this failure, the city received in northern Syria to endure very heavy air raids.