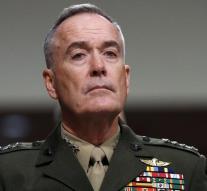 seoul - The supreme US military, chairman of the Joint Chief of Defense, General Joseph Dunford, said Monday that his country has left all military options against North Korea open. This in case the diplomatic and economic sanctions against the Asian country fail.

He said during his visit to the South Korean president Moon Jae-in in a fifty-minute interview on recent issues including the provocations of North Korea.

Dunford is in Seoul for a meeting with the South Korean military summit, including Minister of Defense Song Young-moo. He will also do China and Japan in the coming days.

The tensions around North Korea have increased in recent months. The country says it's close to its goal to be able to reach the United States mainland with a nuclear weapon. Pyongyang also says it has plans to attack the island of Guam, a US territory located in the Pacific Ocean.