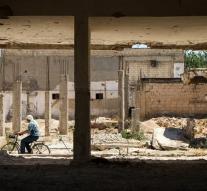 beirut - The Syrian army of President Bashar al-Assad has released the last town of interest in the Homs province from Islamic State. Al-Sukhna, located about 50 kilometers from the historic city of Palmyra, was attacked on Saturday from three sides, reports state sanatorium SANA.

According to Hezbollah, that battle against Assad, a lot of progress was made in the city. The Syrian Observatory then reported that Al-Sukhna was completely refurbished. The Syrian army with the help of their Iraqi and Lebanese allies, funded by Iran, continues to rise to the east. The border with the province of Deir ez-Zor, which is still largely owned by IS, is about 50 kilometers away.