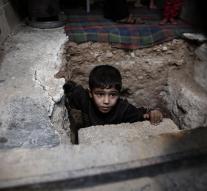 aleppo - The Syrian army has accused rebel groups of the deaths of dozens of people in the besieged city of Aleppo. By shelling would come in three days 84 people dead including poison gas and missiles. It would mainly be women and children.

The armed forces of the Syrian regime claimed Monday in a statement that opposition fighters have taken include schools and civilians under fire. There would be fired twenty buses with poison gas and fifty rockets.

The army points include an accusing finger at radical Jabhat Fateh al-Sham, formerly known as the Nusra Front. Western countries and human rights organizations accused before the army, which will air support from the Russians, the harassment of hospitals and other places where civilians congregate.