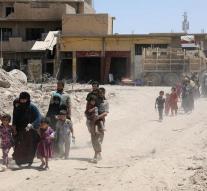 mosul - Iraqi armed forces opened flight routes on Saturday, allowing hundreds of civilians to escape from Mosul's Old City. Warriors of the Islamic State terrorist organization defend the remains of the official capital of the caliphate that IS called three years ago.

Specially trained units in urban warfare pull along two perpendicular roads to the heart of the old city center to isolate the remaining jihadists into four parts. The troops have to conquer the terrain from home to house on the extremists. The streets are too narrow to use armored vehicles, but the Iraqi units get air helicopters.

In the area more than 100,000 citizens would be stuck. According to Lise Grande, humanitarian coordinator of the United Nations in Iraq, there are reports that they are used by IS as human shield.

Behind the slow-moving Iraqi forces, escape routes emerged. On one of these, Saturday saw a minimum of twenty minutes reaching at least one hundred citizens to reach an area west of the city that is in the hands of government forces. Among them were families with injured and malnourished children.

The government wants to completely free Mosul in the coming week. According to military analysts, the government campaign has gained momentum after IS Wednesday itself blows up the Al-Nuri Mosque. For this reason, the army continued to rescue the 850 year old prayer house, where IS leader Abu Bakr al-Baghdadi called on the caliphate on July 4, 2014. According to US and Iraqi officials, al-Baghdadi has left the city shortly after Mosul's offensive began.