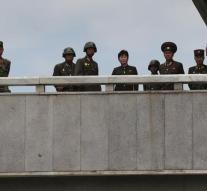 seoul - North Korean special units practiced last month on infiltration of targets with paragliders. They did according to sources of the South Korean state press office Yonhap in a training site where the joint command center of the US and South Korea was rebuilt.

The North Koreans practiced for the first time with paragliders the penetration of the so-called Combined Forces Command in Seoul. The sliding windows are relatively light, inexpensive and easy to operate. Units from multiple combatants participated in the multi-day training exercise.

A source in the South Korean army warned that special units with hang gliders at night could hardly be observed, even on the radar. 'A paraglider flies at low altitude without making a noise. That can be useful in a surprise attack. '