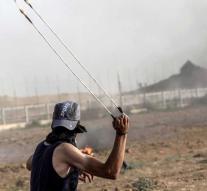 jerusalem - The Israeli anti-aircraft fire has shot a number of rockets from the air in the south of the country. According to the army, the missiles came from the Gaza Strip.

The air alarm sounded in several villages near the Gaza border. This should warn residents of an approaching missile strike. It is the first time since the beginning of the great Palestinian protests on 30 March that missiles have been fired towards Israel.

A Palestinian spokesperson says Israeli fighter planes have attacked several targets in the Gaza Strip. Hard explosions could be heard in the Palestinian territory.