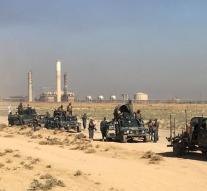 bagdad/erbil - The Iraqi forces said several positions had been handed around the town of Kirkuk. According to the army, it is an air force base, a power plant and an industrial district.

'The armed forces continue their march,' said a statement. The Kurdish authorities have not yet confirmed the terrain of the Iraqi armed forces, but according to the Kurdish transmitter Rudaw, Peshmerga fighters have left their positions south of the city.

The Iraqi state television earlier reported that Prime Minister Haider Al-Abadi had ordered his men to guarantee security in Kirkuk in cooperation with the Kurdish Peshmerga. Large areas around the city would have fallen 'without confrontation' in the hands of the army.

Officially no fighting has yet been reported, but local Iraqi media cite a Kurdish representative who says that seven vehicles of a Shiite militia have been destroyed by Peshmerga. Also, a local TV station broadcasts images of bombings south of Kirkuk.

In the past few days, thousands of Kurdish warriors were sent to Kirkuk. They had to turn off a possible attack by the Iraqi government army.

The US Department of Defense said 'being very concerned' about reports about armed confrontations. The Pentagon called on Iraqi and Kurdish troops to 'avoid actions leading to escalation,' preserving unity and focusing on the joint fight against terrorism.

The town of Kirkuk lies nearly 250 kilometers north of Baghdad in a region that has been inhabited by various populations for a long time. For example, there are Iraqi Turks (also called Turkmen), Kurds and Arabs.

Kurdish warriors took the city in 2014 when Iraqi troops retreated during the march of the Sunni extremists of Islamic State. The Kurds now claim that Kirkuk is part of the autonomous Kurdish region, but Baghdad and Ankara fight that fierce.