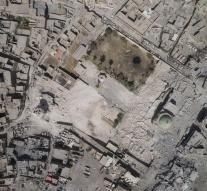 mosul - The Iraqi army says Thursday had occupied the destroyed historic mosque in Mosul where Islamic State called out the caliphate three years ago.

The intake of the Great Al-Nuri Mosque is mainly of symbolic significance. The Iraqi army has been occupying Mosul, the northern city that formed the real capital of IS for eight months.

The medieval mosque is not much left over. The extremists blew the mosque and its distinctive minaret a week ago.