Home / World / Army Iraq defeats district in Mosul on IS 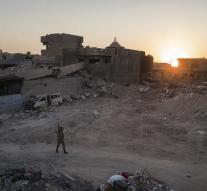 mosul - Iraqi troops have themselves conquered the al-Faruq district in Mosul conquered by warriors of the Islamic State (IS) terrorist group.

The neighborhood is located in the northwestern side of the old city opposite the historic large al-Nuri mosque, which was destroyed by IS militants last week. Islamic State still has control over the territory of the mosque.

The mosque was of great symbolic importance for the terrorist organization. In this building, IS leader al-Baghdadi called the caliphate three years ago.