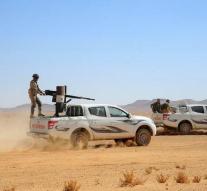 baghdad - The Iraqi army and Sunni militia have re-crossed the border crossing of Al-Waleed on the border with Syria on the Islamic state terrorist group. They received air support from the US-led coalition and the Iraqi air force, reports the Iraqi army.

Al-Waleed is close to Tanf, strategically located on the border between Syria and Iraq. Since last year, there have also been US military personnel who help Iraqi armed forces to recapture land on IS.