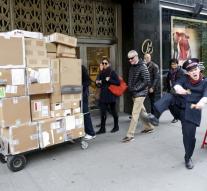 - The familiar red kettle of the Salvation Army has never been so heavily taxed in one go. A couple who wishes to remain anonymous, last weekend threw a check for the equivalent of 472 000 euros in the money pot which the Army in the American city of Rosemount was established in the state of Minnesota.

The affluent couple had two reasons to support the Salvation Army. First they lived when they met some time from a food bank and, secondly, the father of one of the two his whole life had been grateful when he as a soldier during the First World War Army had unexpectedly coffee and donuts each.